This is the man Nigel Farrage who should have been our Prime Minister after the general election last year.

He’s the only person I can think of with the courage to walk into a building full of sneering, unelected officials and ask one of them

He’s the man whose passion for our country is so strong that he’s prepared to say, bluntly, “I want my country back”.

Nigel Farrage is the man who would have implemented policies that would have put our country back on the right path again. Here’s what he would have done if he had been Prime Minister of the United Kingdom:

– Eliminated the stuctural budget deficit by reducing international aid down to 0.2 per cent of national income, ending the net contribution to the EU and reducing spending funded by the gross contribution, scrapping HS2, phasing out the Barnett Formula, closing down the Department for Energy and Climate Change, amongst other things;

– Led our country out of the corrupt European Union and brought back the perfectly good system we used to have whereby the Parliament in our country made the laws;

– Controlled immigration by introducing a points-based system that doesn’t discriminate according to where people come from and ensures we only allow in people with the skills we need;

– Once out of the EU, ensured we reoccupy our seat at the WTO and sign new trade agreements with the rest of the world to build a more sustainable economy for the long-term, that would provide the revenues necessary to help reduce taxes and provide additional spending for important public services such as the NHS;

– Backed grammar schools and permitted the opening of new ones;

– on the condition that the students agree to work and contribute for at least five years following graduation;

– Prevented migrants from claiming benefits unless they worked and contributed for at least five years;

– And required migrants to take out private health insurance until they have worked and contributed for at least five years in order to relieve pressures on the NHS. This is not a comprehensive list by any means but these are the main policies he would have put in place. As you can see, UKIP’s policies are almost the opposite in every area to what Labour, the Conservatives, the Lib Dems, the SNP, Plaid Cymru and the Greens would do.
The choice is clear – either you want the failing policies of the six aforementioned parties to continue.

Or you prefer a radical, common-sense alternative offered by Nigel and UKIP. I know which I prefer and it’s not the former. 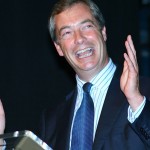 Nigel Farage UKIP This is what he said