David Cameron stated that we “will play a key role” in delivering an international mission to rescue the stranded Yazidi community in the Iraq mountains. Prime Minister Cameron says “there are detailed plans being put in place” to help rescue Iraqi Yazidis stranded in the Iraqi mountains, with the UK set to “play a key role in delivering it”

The Prime Minister called a press conference to announce the news after returning from his family holiday. He chaired a meeting of the Government’s Cobra emergency committee to discuss the crisis in Iraq. But he insisted Britain’s involvement remained a humanitarian mission as he as come under pressure to directly arm Kurdish forces or join America in air strikes against the Islamic State (IS) extremist fighters.

He has also dismissed calls for Parliament to be recalled, stating it was unnecessary at this stage but has not ruled it out and would be kept under review. 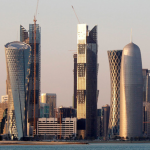 Is Qatar funding the Jihad extremists